The goal of the project is to analyze the environmental and socio-economic factors that have made past Mediterranean societies more or less resilient or capable of adaptation. This projec integrates climate reconstructions over the last millennia with archaeological, historical, and environmental datasets, and evaluates the impact of climate variability on the feedback cycles between societies and their environments, especially under the angle of agriculture.

We are interested in the transition between the Iron age and the Roman period in the Gaul. The strategy is as follows:

The predictive model developped in this project supports the following hypotheses:

- Thanks to the favorable climate conditions during the Roman Climatic Optimum, winemaking has extended outside the Mediterranean basin, reaching northern Gaul, especially around the main roads and rivers and big towns, on land with southwards exposure (Figure).

- Considering the potential rise of yields, winemaking probably became competitive enough in Gaul to challenge Italian wine production. Indeed, these producers had been making significant profits selling wine in Gaul since the 2nd c. BCE, as is attested by the Italic amphorae found on numerous Second Iron Age sites. Domitian’s famous edict of 92 CE, which stipulated that half of the vines in Gaul should be uprooted, was certainly a protectionist measure for Rome that aimed to protect the Italian production against the Gaulish competition wthat clearly had become strong in the late 1st c. CE. While his edict was probably not enforced, the authorization given by Emperor Probus at the end of the 3rd c. CE for planting vineyards in Gaul very certainly encouraged this activity.

- In the 4th c. CE, the vineyards in Moselle and Garonne were very dynamic, according to Ausone’s poetic evocation. These vineyards may have also competed with those of Gallia Narbonensis, whose decline seems to have been irremediable after the 3rd c. CE. If, according to paleoclimatic proxies, the climate in late antiquity seems to have got cooler compared to that of the High Roman Empire, it was still not yet unfavorable to winemaking. Moreover, the predictive model we have created shows that the geographic and environmental conditions were favorable for its development there, especially in the northwestern quarter of Gaul. 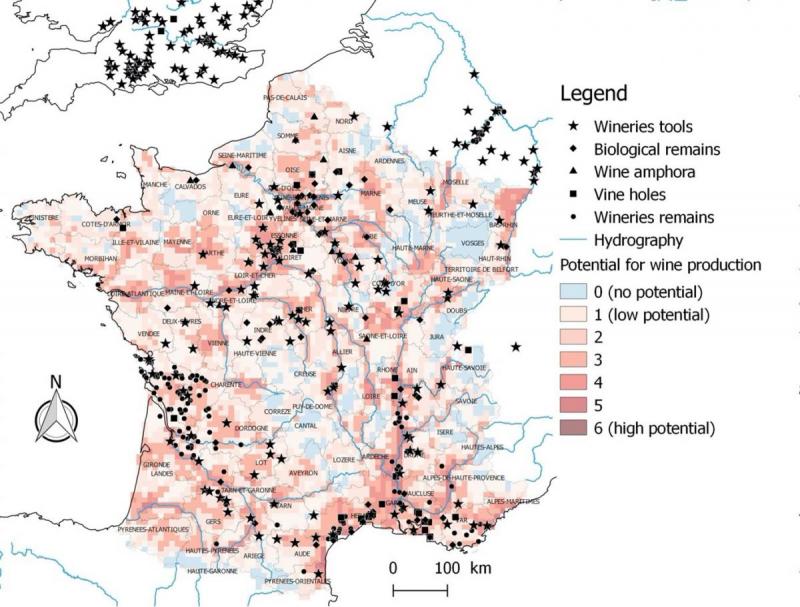 Overlay of archaeological data on Gallo-Roman viticulture on the results of the predictive spatial model. The symbols represent the archeological data and the reddish colors an indicator of viticulture suitability based on the number of good factors.